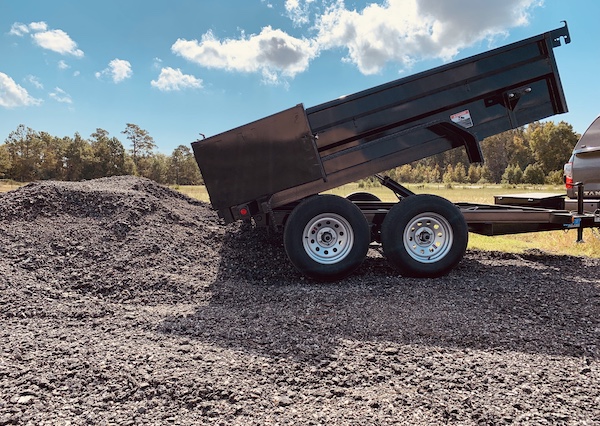 I don’t know who invented the dump trailer, but I’d like to buy them a beer. A few weeks ago, I was reminded of how amazing dump trailers are. You see, I recently had to unload three tons of gravel with a shovel. Each shovel of gravel was another sweaty reminder that, if I had a dump trailer I could just push a button and that gravel wouldn’t be a problem.

Being a glutton for punishment, I decided to put one of our Top Hat trailers to the test. Only this time, I wouldn’t be slinging a shovel. The dump trailer of choice was the Top Hat 12X77-DP100. A bit of an overkill for the project I had in mind, but hey, smoke ‘em if ya’ got ‘em, right?

When hauling the trailer, the first thing I noticed was the heft. This thing’s a beast. Don’t misunderstand what I’m saying here. The trailer wasn’t difficult for my truck to haul, but it didn’t bounce down the road when empty. It hauled like a dream, probably due to the Gross Vehicle Weight Rating (GVWR) of nearly 10,000 pounds.

So how’s it haul with a load on it? Just like you’d imagine. I could hardly tell it was there. With Nev-R-Adjust Easy Lube Dexter axles that have been through rigorous stress, fatigue, and metallurgical evaluations while computer equipped test vehicles analyze the trailer’s performance, it’s no wonder why this thing hauls so well.

Usually when I get a load of rock from the landscape supply shop, I’m concerned with how rough they are when dumping the rock into my trailer. But this time, I wasn’t. As the front end loader dumped the gravel into the bed of the dump trailer, it barely moved. With 10 gauge steel floors and 12 gauge steel walls, the thing’s a nimble tank.

Unloading the gravel was nearly as easy as watching the front end loader dump it into the trailer. I backed the trailer into place, unlatched the barn door rear gate, and pressed the button on the single ram scissor lift hydraulic motor that’s charged by a deep cycle 12 volt marine battery. That was it. I was done. The gravel slid right into place.

I can unequivocally say that if you frequently haul anything that’s dumpable, you owe it to yourself to haul it with the Top Hat 12X77-DP100. Overall, this dump trailer gets two shovels up from me.

If you're still wondering what's the right trailer for you, contact Affordable Trailers to find your tailored trailer.
Call Now

Buying a trailer is a big purchase, and we know you want to get it right the first time. Count on us to help you do just that.